The Cheapest Way to Eat Vegan

There are a ton of reasons that people are beginning to switch over to a vegan lifestyle, many of which aren’t often talked about. The general assumption is that people eat vegan for the sake of animals’ lives, which of course is a valid and common reason. But things like personal health concerns, wildlife preservation, or an attempt at reducing your contribution towards global warming are all common reasons too!

Of course,  there are downsides as well. Some people have health restrictions that are difficult to work around. However, when people are asked why they aren’t vegan, so many people respond that it’s too expensive. Which is simply not the case! It’s definitely feasible to go vegan on a budget

One of the most common pieces of financial advice I get is to never buy anything that isn’t on sale. This goes for food too!

Make a trip to your preferred grocery store with the focus of finding a good deal. A lot of grocery outlets have sales listed on their websites if you don’t want to waste a trip. This especially comes in handy when it comes to produce. Prices within the produce section rise and fall constantly, and there’s always one or two items on super sale. Make sure you know seasonal fruits and veggies so that you can try to sneak your way around the more pricey items. If you’re working on a super tight budget, buying frozen or canned fruits and veggies is also a good option. These last way longer as well!

Make an effort to build your vegan meals around the sales, rather than going shopping for specific items. Obviously, not everything will be on sale, but this mindset makes a huge difference!

Shopping once or twice a week and picking up a couple items each time is a great idea. The biggest benefit is that you don’t have to worry about being overwhelmed by the food you need to eat up in your fridge. You’re more likely to use all the food you buy and avoid waste. This will also help you keep an eye on fluctuating sales!

It is true that there’s often a protein drop when people switch to a vegan lifestyle. When you suddenly don’t have a slab of meat with every meal, it’s hard to keep in mind that your body is confused. It’s easy to get deprived or sick if you aren’t smart about the switch. This is where a lot of the stigma of veganism being expensive comes from. Foods like tofu or imitation meat can be pricey. But there are much cheaper ways to maintain your protein levels!

Regardless of your dietary restrictions (or lack thereof), it’s important to eat well. Eating good food is essential in terms of health both physically and mentally. Knowing what to buy in order to take your vegan meal to the next level is essential, and knowing which of those things can be cheap can be even more important.

First off, the best (and most obvious) way to enhance a vegan meal is spices. These are cheap, last forever, and are mandatory in cooking a good meal. Really the only excuse for not using spices in every meal is if you’re 20 and just started cooking. And even then that’s not a great excuse! Chilli flakes or taco seasoning are the easiest to incorporate into essentially anything you cook.

But you should also be keeping in mind quality in terms of substance as well as flavour. Making filling meals means you’re less likely to snack later, which saves more money than you would probably guess. Luckily, substance is cheap!

Higher carbohydrate count equals filling foods, and carbs are usually cheap and easy to cook. The best way to go about this is something simple, like rice or pasta, which could both be a key in most vegan meals. Going back to the vegan staple, mushrooms are another perfect way to add body to a meal. Sautéing mushrooms is a one-step guarantee to creating a delicious vegan meal.

One of the more difficult parts about veganism is the inspiration. After living your whole life one way, having specific go-to meals and snacks, switching to brand new ones can be difficult. This is definitely the aspect of it that takes the most practice. But it doesn’t take too long before you adopt some new recipes that you actually enjoy!

All of the meals that I’ve landed on are also easy to cook and super cheap to eat vegan. Here are my favorites:

In short, eating vegan isn’t hard! And it doesn’t have to be expensive either.  But it does help to have a few tricks up your sleeve before you get started. Once you have them under your belt, vegan on a budget is easier than you probably expected. And the benefits to your health and the health of the planet are endless!

A Perfectly Curated Closet (Without Breaking The Bank) 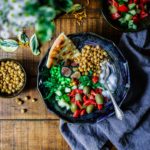 Why a Meal Delivery Service is Best For Your Grocery Budget

3 Tips to Help You Thrift

How to Maximize Your Starbucks Rewards

The Price vs. Cost of Non-Necessities

Spending proportionately to your income or your net worth

Should you buy it? Use the 45 Minute Rule