What is Good Money?

What is good money? It’s a question I wonder often. I’m abnormally interested in income and wealth distribution. Who has how much? Where do they live? How did they get it? I find the economics and social impact of wealth disparity fascinating, and love to investigate the cut-offs for the 1% or the 0.01% in wealth and income.

For example, this is one of my favorite income comparison calculators. It tells me there are approximately 285,000 white females between the ages of 25 and 34 with a bachelors degree or higher. And their median salary is $53,000 per year. 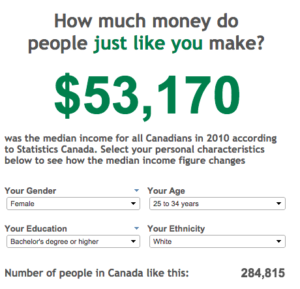 The median income of Canadians with my demographic characteristics

In Canada, the 1% club has an income threshold of $191,000 — but there’s some geography at play. I live in Calgary, Alberta which has the highest concentration of millionaires in the country.

And it’s obvious. Even with low oil prices making major dents in income and wealth amongst Calgary’s elite, the fact that money is everywhere is still visible. The city is full of luxury sports cars, condos, retail stores, and many of my female friends sport engagement rings with diamonds that resemble small skating rinks. Forget keeping up with the Joneses, I’ll never catch them in the first place. They’re on another planet of super wealthy that I visit for dinner parties (which isn’t so bad, to be honest).

The abundance of wealth has skewed my perspective of it. It’s easy to mistake an abundance of credit card debt for actual money, and at the end of the day, I have no idea if someone financed their new BMW or if they paid with cash because either is equally likely. When a friend told me her husband made “good money” I thought, “well, obviously he’s earning at least $130,000 per year, maybe as high as $150,000” to which he scoffed and said, “you mean more like $80,000 or $90,000”.

What is good money?

Wealthy 1-percenters aside, what is the upper middle class? Who is the top 20% or 30%? What do they make? How much do they have?

Which leads to a side tangent within my own head that goes something like:

Where do you spend good money?

By the time it occurred to me that a salary of say, $6 million per year, would translate to an income of $500,000 per month, I found the sum too disorienting to really compute, because what the hell would you even do with that?

Most CEOs in Alberta make more than that, which makes it all the weirder. After you buy your mansion and your car, what do you do with the rest? And so my fascination with high-income earners feeds itself even more.

Because there’s a dark side to unequal wealth distribution, and Calgary leads Canada in that regard as well. Where there are big salaries, there are also big gaps between those that earn them and those that can never hope to. The top 10% of Calgary’s families earned 37x more than those at the bottom, and it’s a widening gap. I’m all for the freedom to earn as much as you dare to work for, but am skeptical that billions can be good for anyone. Economic mobility is key to a healthy society, and Calgary (and Canada in general) is snuffing it out.

“Good money” might simply mean more than your friends

Apparently, one of the shortcuts to feeling unsatisfied with your life is to move into a neighborhood where everyone can afford more than you. How you perceive your income and wealth has little to do with its actual number, but really depends on how you compare to others around you. And that’s one of the double-edged swords of cities like Calgary: it’s an attractive place for jobs and high wages, but if you’re going to be a modest earner, it can be kind of a downer.

RELATED: Why You’ll Never Be Rich – The American Dream Is Dead

Now that oil prices have fallen, it looks like all that glitters is not black gold. Many of my friends that had moved here for the MBA program are talking about heading home after graduation, the hope of cracking the top 10% in Canada’s incomes evaporating in the wake of company layoffs and hiring freezes. The ultra-rich on the other hand, aren’t fired, they’re maybe taking a modest pay cut. And I am still looking at the numbers, trying to find out where I stand. 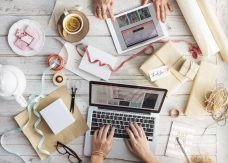 25 things to do to improve your finances this weekend 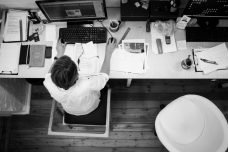 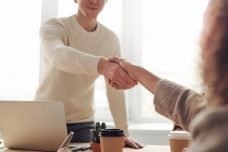 How To Negotiate Your Salary

How To Pay Yourself When Self-Employed 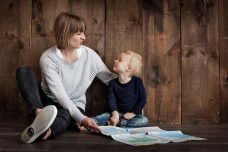 How to Hustle as a New Parent

The Only Personal Finance Books You Need To Read In 2015 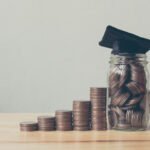